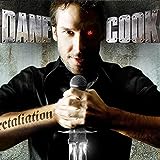 Previous: Tonight on the Tube: Arrested Development and Las Vegas

Next: Tonight on the Tube: Charlie Brown, Earl, The Office and Boston Legal