Tonight on the Tube: 24 and Greyâ€™s Anatomy 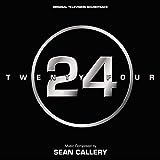 The big news of the night is the return of 24. In other news Law & Order: Criminal Intent hits a milestone tonight with their 100th episode. Wow could a night have anymore-good TV shows on all in one night. VCRs, DVRs and recorders of all types will be working overtime tonight. I know mine will. What will you be watching tonight?

24 (FOX): Jack is back with an explosive two-hour premiere. This will be the fifth really bad day for our hero Jack Bauer. The day kicks off at 7:00 a.m. with Jack becoming a wanted man after national security forces are breached. Two more hours follow tomorrow night.

Greyâ€™s Anatomy (ABC): Izzie finds she has chemistry with a patient awaiting a heart transplant.

The West Wing (NBC): Some embarrassing info about one of the Bartlets distracts CJ while she is trying to negotiate with China and Russia.

Desperate Housewives (ABC): Susan meets a Doctor who turns out to be a lot like her. Some old photos of Gabrielle hit the Internet. Doug is worried when the kids come down with chicken pox because he has never had them. The show runs a minute past the hour.

Crossing Jordan (NBC): Macy gets a DUI the night before he is to testify putting his credibility and his job as chief in doubt. Jordan and Woody deal with where things left off last week.

Extreme Makeover: Home Edition (ABC): A house is redone while the family visits the Mouse House.

Jesse Stone: Night Passage (CBS): Tom Selleck plays a former Los Angeles policeman who becomes the Sheriff in a small town with a lot of secrets.

Inside the Actors Studio (Bravo): James Lipton interviews Ralph Fiennes, I wonder what his favorite curse word is? Favorite sound?

The Shield (FX): Repeat of Extraction from earlier this week.

The NFL Playoffs continue today with the early game on CBS being the Pittsburgh Steelers trying to go into Indy and beat the favored Indianapolis Colts. The late game of FOX has the Chicago Bears trying to fend off the Carolina Panthers at home in Chicago for a chance to play the Seahawks next week.

ESPN has final round coverage of the Sony Open in Hawaii as Chad Campbell and David Toms are tied at the top of the leaderboard with a seven-stroke lead on the rest of the field.

Next: Tonight on the Tube: 24 and Golden Globe Awards