Search
Menu
Categories
‹ prev next ›
0
American Idol: How Did the Top 7 Do on Season 5
April 19, 2006 Jason the TVaholic Rankings 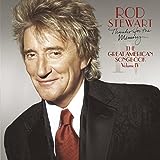 I thought they were going to be singing the songs of Rod Stewart. They were in a way but not exactly. The Top 7 sang the standards, the classics. The songs Rod Stewart has been singing as of late with his The Great American Songbook series of records. These were the songs the American Idol hopefuls had to choose from.

So who will end up in the bottom three? I think it will be Elliott, Ace and Kellie. Maybe the same thing as last week will happen and the person with the second worst performance will be sent home. In that case it would be Ace dealing with getting flushed. He has been down there a lot but so has Elliott. I think that Kellieâ€™s past performances and personality may keep her in the competition at least another week. I sure hope so as I would rather watch her than Ace.