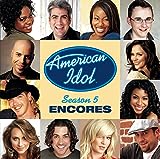 For season finales tonight we have two episodes of Scrubs on NBC followed by Law & Order: SVU. On ABC Boston Legal gives you two hours to close out the season, as does The Unit on CBS. Also on CBS NCIS finishes up for the season. Yesterday we got the NBC Fall 2006 TV lineup announcement and today it is ABCâ€™s turn. What will you be watching on TV tonight?

American Idol (FOX): The three remaining contestants sing three songs tonight. One will be chosen by music producer Clive Davis, the second by the judges and the last one selected by them. Will be interesting to here what kind of songs the judges picked for each singer.

House (FOX): A Katrina hurricane victim is brought in suffering from hallucinations by and ex-bandmate of House. Cuddy continues her search for a sperm donor.

Law & Order: Special Victims Unit (NBC): Season Finale. Season seven ends with the investigation of a rock star who goes on anti-psychiatric-drug kick and then one of his fans stops taking hers and ends up running her car through a crowd of people. Can you say ripped from the headlines? From old headlines but headlines indeed.

NCIS (CBS): Season Finale. Second part of the two part third season finale. Gibbs has some memory loss after waking. Will he remember in time to stop the terrorist attack that he learned of right before the bomb that sent him to the hospital went off? Or will we have to wait until next season to find out?

The Unit (CBS): First of two episodes tonight to close out the season. In this one the team is called in to help investigate a bomb at an Atlanta bank.

The Unit (CBS): Season Finale. The second episode tonight has the team helping the U.N. bring in a Bosnian war criminal but he escapes putting the team at risk.

Celebrity Debut (ABC): See how stars like John Travolta and Halle Berry got their start. See them and others before they were famous.

Boston Legal (ABC): Season Finale. Tonight Denny and Alan are in LA for business and wind up taking the case of a celebrity played by Jeri Ryan who is accused of shooting a photographer. Back in Boston Denise tries to keep Marlene from ruining her chances at becoming partner. Runs two hours.

Wrecks to Riches (TLC): The Beverly Hills Fire Department helps on the latest wreck to be redone.

Love Monkey (VH1): The last of the filmed episodes of this show airs tonight.

So NoTORIous (VH1): Comedy based of the life of Tori Spelling.
Jamie Kennedyâ€™s Blowinâ€™ Up (MTV): Jamie stars in this faux reality series that follows him on his quest to be a rap star.

TNT has an NBA playoff doubleheader where in the first game the Miami Heat try to close out the New Jersey Nets and the second the Los Angeles Clippers play at the Phoenix Suns.