Tonight on the Tube: My Name Is Earl, The Office & Windfall 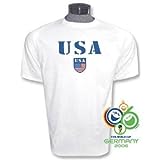 The United States soccer team plays Ghana in the early morning hours today on ESPN and they need a win for any hope of advancing. They also need Italy to beat the Czech Republic which match will be taking place at the same time over on ESPN2. Have you been watching any of the World Cup games? Will you be watching this morning?

My Name Is Earl (NBC): Repeat. Earl tries to make up for not paying taxes in the past.
The Office (NBC): Repeat. It is the office Olympics, which is a very funny episode right down to the doves at the closing ceremony.

My Name Is Earl (NBC): Repeat. Earl tries to make for scarring a kid into being afraid of the dark because while stealing from the house he had to hide under the kidâ€™s bed and freaked him out.
The Office (NBC): Repeat. Take a little booze cruise with the staffers of Dunder Mifflin.

Windfall (NBC): New. The unclaimed dollar continues to cause problems and Cameron and Beth arenâ€™t getting along well. In other happenings Damien is dealing with his loneliness.

CSI: Crime Scene Investigation (CBS): Repeat. A psychic who saw her own death is murdered.

Without a Trace (CBS): Repeat. Very good episode about a paramedic that goes missing after treating a gang gun shot victim.

This Jobâ€™s a Trip (Travel Channel): New. Two people who think they want to be stand up comics get a shot at doing five minutes at the Improv.

Last Comic Standing (Bravo): Repeat. If you missed Tuesdayâ€™s episode with all the heckling here is your chance to see what happened.

Next: Tonight on the Tube: Day 5 of 24 on FOX Continues, Take Home Chef & What Not to Wear