Tonight on the Tube: Three Moons, 4400, Dead Zone and a Monk Marathon 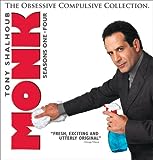 You can catch up with the entire season of Monk so far and a few previous episodes today, although they are in reverse order for some reason. The big news of the night is the return of Jordan Collier on The 4400. Where has he been? Billy Campbell, the guy who plays him, has been on a sailing trip around the world? What will his return mean seeing how he was thought to be dead? Will you be watching tonight?

The Simpsons (FOX): Repeat. Marge takes in the homeless janitor after Bart destroys his shack.
American Dad (FOX): Repeat. Stan and the family move to Saudi Arabia and Stan takes a quick liking to the male dominated society.

Desperate Housewives (ABC): Repeat. Lynette tries to help her boss with his sex life and only ends up getting her husband in trouble in the end.

Without a Trace (CBS): Repeat. A young bicycle messenger has gone missing and Martin is really starting to behave erratically.

Extreme Makeover: Home Edition (ABC): Repeat. A family that lost their home in a propane explosion gets a new one.

Cold Case (CBS): Repeat. New evidence comes forth in a case of a 1973 tennis player that was found murdered in her room after a battle of the sexes tennis match.

Greyâ€™s Anatomy (ABC): Repeat. The â€œStraight to the Heartâ€ clip show is played.

Three Moons Over Milford (ABC Family): New. The Davis family is kicked out of their house. The episode plays twice tonight.

The 4400 (USA): New. Jordan Collier is back. This ends up sending Tom and Diana on an unexpected manhunt. Runs 61 minutes and repeats again later.

USA has a Monk marathon with 9 episodes leading up to tonightâ€™s episode of The 4400. It is kind of strange as this seasonâ€™s episodes play in reverse order with the season premiere being the last to play.

Previous: Tonight on the Tube: Crimetime reruns, Feasting on Asphalt and the Seahawks Here in Seattle

Next: Tonight on the Tube: Kyle, Brenda, Wyatt and Monday Night Football