Why did Lola Glaudini leave the show Criminal Minds? And More of Your TV Show Questions 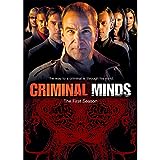 Next: Tonight on the Tube: The Office, Greyâ€™s Anatomy, Shark and College Football