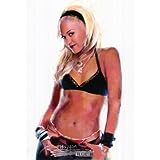 Previous: How Did the Top 10 Perform on American Idol Season 6?

Next: The Hair is one of the Remaining Nine on American Idol Season 6