This Friday, July 27th, The Simpsons Movie hits theaters. But, before it does, four master cake designers will face off for a chance at $10,000 in “The Simpsons Cake Challenge.” They will be Debbie Goard of Oakland, CA, Bronwen Weber of Dallas, TX, Mary Maher of Chicago, IL, and Tad Weliczko of New York, NY, pictured below. 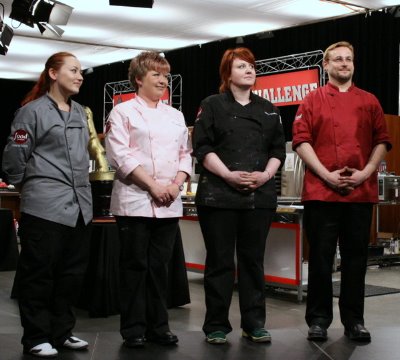 The last Food Network Challenge I watched was a rerun of the “Extreme Cake Challenge.” The winner of that one built a six-foot tall sock monkey cake, which was pretty spectacular and totally extreme. This time around the competitors have to bring The Simpsons to life using cake. Check out Bronwen Webber’s donut cake on a skateboard. 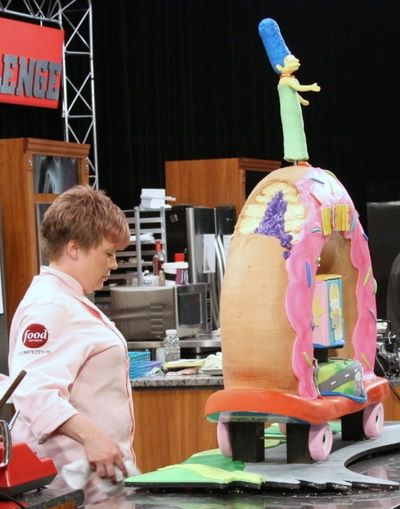 Ay Carumba! That’s a pretty awesome cake. Another cake looks to have a Krusty the Clown theme, while a third looks to turn Homer into an Oscar statue. Who will win, I have no idea, but watching these cakes get built is always something to behold. The planning, the execution and most importantly, the moving of the cake from the work area to the display area, make for an interesting hour tonight on the Food Network.

Update 7-26-07: This Food Network Challenge left a bit to be desired. One contestant didn’t manage her time well and only had half a cake. The only guy in the competition couldn’t figure out how to make his Homer and wanted to quit. The winner of the competition was Mary Maher with her Krusty the Clown cake. It was pretty good and it should have been a close call between her and the Bronwen Weber donut cake pictured above, but the reason the judging panel gave for her not winning was just not right. They said having a giant donut and not more about the characters didn’t capture the spirit of the movie, which was one of the things the cake was supposed to do. This is weird to me because, well the FOX marketing department sure seems to think that the donut captures the spirit of the movie, considering that a donut and Homer’s hand is all that appears on the movie poster. Secondly, the town of Springfield that won the right to be the official one of the show, featured a giant donut rolling through their town.

Did you watch? What did you think of “The Simpsons Cake Challenge?”

Next: Tonight on the Tube: The Simpsons Cake Challenge, Mad Men, The Kill Point & Rescue Me