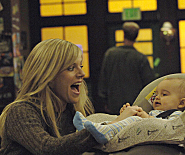 Long Synopsis: While talking about global warming the gang comes across a baby in a dumpster. Not sure what to do, Mac decides that he and Dee should take care of it until they figure it out. Meanwhile, Glenn decides to join in on helping the environment, until he is punk’d by a hippy do-gooder about his commitment to the cause.

Review: It’s Always Sunny in Philadelphia is one of those shows that you always hear good things about, but for some reason, you just don’t get around to watching it. This is what it has been like for the TVaholic. So, when a screener with the first four episodes of the third season arrived, I figured there was no time like the present to jump on board.

I liked the writing and plotting of the episode. It was very well crafted and had a Curb Your Enthusiasm

feel to it. The whole show is like a setup for the final scene, which serves as the punch line for the entire episode.

I didn’t like that there weren’t enough laughs leading up to that punch line. I saw a lot of social parody and commentary, but it was barely smile inducing. This is definitely not your average network sitcom.

If you like clever, but over-the-top, humor from your sitcoms, then you might just like It’s Always Sunny in Philadelphia. The third season will have 15 episodes and premieres tomorrow night, Thursday, September 13th, on FX. It will be followed by another new episode, which I happened to enjoy a bit more than this one.

What did you think of the season three premiere of It’s Always Sunny in Philadelphia?

Next: TV Review: It’s Always Sunny in Philadelphia – The Gang Gets Invincible