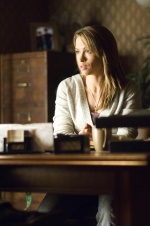 Quick Synopsis: A killer out of body experience.

Long Synopsis: An undercover cop and old acquaintance comes to the detective agency for help. He wants to find out what happened to his body and why he is now a ghost. A little later it is found that he is not as dead as he thinks he is, as his body is still up walking around. The search for what is happening continues and it is found that some other being inhabits him. Can they get it out of him before more people die?

Review: Blood Ties is back for 10 more episodes. The show is based on the characters of Tanya Huff’s Blood Books series

. It tells the ongoing story of private investigator and former cop, Vicki Nelson, played by Christina Cox (F/X: The Series), her vampire partner, Henry Fitzroy, played by Kyle Schmid (Beautiful People), and her former partner on the force and off, Det. Celluci, played by Dylan Neal (Dawson’s Creek). Together, they end up investigating the weird and unexplainable things that go on in Toronto.

The two-hour pilot, “Blood Price,” for the series was one of the worst things to hit the small screen last season. The acting was bad, especially from those not in the main cast. The dialogue wasn’t much better. But, after a couple of episodes, it got a little better. Surprisingly enough, the first episode of the new season wasn’t that bad. Having done twelve episodes, the cast seems more at home in these characters now.

The best of the bunch is Coreen, played by Gina Holden (Flash Gordon). She is the goth-like chick that has a fascination with all things supernatural and from the looks of things, a little crush on Fitzroy.

But, the best thing about this episode was that Det. Graham, played by Keith Dallas (Snakes on a Plane), was nowhere to be seen or heard. His character’s only purpose in the first season was attempts at comic relief. The only relief was when his character left a scene.

Blood Ties falls on the quality supernatural show spectrum with the likes of this year’s Moonlight on CBS and the old “Crime Time after Primetime” CBS show, Forever Knight. Although, it may resemble the latter do to both being set in Toronto. The basic plot and stories are interesting; they just aren’t executed very well.

This show doesn’t live up to the new high standard that Lifetime has set with their summer offerings like Army Wives and the terrific Side Order of Life.

But, if you are looking for something to watch late night Friday, then you may want to check Blood Ties out, or right now you can download this episode at iTunes at no charge.

What did you think of the season two premiere of Blood Ties?