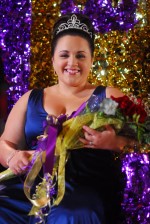 Quick Synopsis: Holding your head up high “in a kick-ass dress.”

Long Synopsis: An overweight high school senior, who has always seen herself as not worthy because of her size, has had to bear the brunt of being socially bullied because of her size. One of the popular girls decides that it would be funny to nominate her for homecoming queen. At first she is horrified that they have found yet another way to torment her, but instead of doing as expected, she decides to stay in the race and run for the crown. With the help of her few friends, she is able to gather enough signatures to stay on the ballot legitimately. She then runs a campaign to be the representative of the less than cool and not popular. She starts to get noticed and when she wins, it goes a little bit to her head. She has to stop and take note of herself and figure out whom she truly is and what she was fighting for.

Review: Queen Sized is inspired by a true story and stars Nikki Blonsky (Hairspray), as Maggie Baker, and Annie Potts (Men in Trees, Designing Women), in a duel role, as her mother and also the manifestation of her inner self doubts. It is the story of a fat girl (she doesn’t like to be called plus-sized) that decides to fight back after the popular kids play a cruel prank.

The review copy that TVaholic was sent included temp audio and no soundtrack, so it is hard to fully judge, as music is a large part of what makes a movie or show work. But, what are here to see, are the performances and the execution of the story. While the story is about what you would expect from a Lifetime movie, the acting is a cut above your average made-for-TV movie.

Blonsky is really good, especially when she is portraying the hurt she feels, as she escapes into eating to try and cover her pain. The TVaholic is sure that this is only improved by the finished audio and soundtrack.

Potts is good, as her mother that doesn’t know how to deal with an overweight child. She thinks that if Maggie would just lose a few pounds that she would feel better about herself, but the way she goes about it only adds to her daughter’s hurt. Potts is really good though, in a more devilish turn, as the manifestation of Maggie’s inner turmoil. She appears to tell Maggie everything that is wrong with her.

This Lifetime Original Movie is worth checking out, especially on a Saturday night that, as usual, is pretty devoid of anything really worth watching.

What did you think of Lifetime’s Queen Sized?