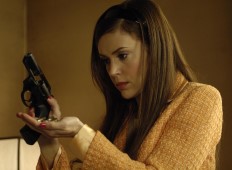 Quick Synopsis: A woman does whatever it takes to provide for her kids.

Long Synopsis: A woman that grew up very poor meets a nice police officer and ends up getting married. They have two children and then he falls ill with cancer. After two years in-and-out of the hospital he passes away. She is left poor once again and begins selling illegal cigarettes to pay the bills. A local captain in the Brooklyn crime family takes notice of her and offers her a chance to run a restaurant of his. She turns it into a hot nightclub and gets noticed by the family Don. He wants her to use her wherewithal to shuttle millions of dollars down from Canada from the family’s operations up there. As the years go by, she ends up deeper than she ever thought she would be. One day she realizes that she can’t do it anymore and wants out.

Review: Wisegal is inspired by the true story of Patty Montanari, played by Alyssa Milano (Charmed, Who’s the Boss?), a widowed mother of two that became a trusted member of the Mafia in an attempt to do right by her kids. The executive producer of the movie is none other than Joe Pistone, the FBI agent whose undercover exploits inspired the movie Donnie Brasco.

When I pulled the Wisegal screener packet from the envelope and saw Alyssa Milano on the cover and the likes of Jason Gedrick (Boomtown) and James Caan (Las Vegas) as co-stars, I was looking forward to watching this. It wasn’t as great as it looked like it might be, but it is worth checking out, especially on a Saturday night bereft of worthy TV watching options.

Pretty much anything with Alyssa Milano in it is going to get this TVaholic to check it out. I mean, she was my first TV crush way back in her Who’s the Boss? days, as she is only six months older than I am. I used to watch that show every week. Check out an interview with her over at theTVaddict.com, for more on her character in Wisegal.

Alyssa Milano is very good and believable in the role, except for her accent coming and going a bit. Jason Gedrick plays a good smooth talker with anger issues and James Caan is, well, James Caan. Some of the other side characters don’t come off as well, as they seem to be right out of the mafia movie stereotype playbook.

Overall, Wisegal is pretty good. It may be even better when it airs than the version I got a chance to watch, as it will have the full soundtrack and musical accompaniment in the final version. Background music to set the mood and transition scenes is a very important element in a movie, one that the preview copy didn’t have.

What did you think of Lifetime’s Wisegal?