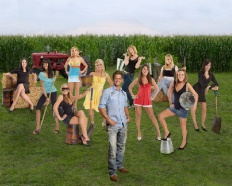 Long Synopsis: Ten women vie for the affections of a farmer in rural Missouri. He is 29 and they range in age from 21 to 27. They all seem to be looking for a change from the type of guys they usually date. In this first episode they have a chicken cooping competition and go on a group hayride. One girl gets sent home at the end of the episode.

Review: Farmer Wants a Wife is The Bachelor meets The Simple Life, although none of these women are Paris Hilton, not that that is a bad thing. But, one of them does think she is God’s gift, which couldn’t be further from the truth, given the way she is portrayed. Anyway, if you think you might find watching women, in their Daisy Dukes and tight tops, running around chasing chickens entertaining, then this just might be the show for you.

It’s like the creators of Farmer were sitting around trying to come up with their next big show idea, while watching The Bachelor on ABC. Then one of them thought, “Hey, what if we did pretty much the same thing as this, but we put it on a farm.” Cause, it is pretty much the same thing, but set on a farm. That one aspect creates the main difference, the fish out of water, Simple Life, aspect of dropping a bunch of city girls in the middle of a small town in Missouri, on a farm.

After watching the first episode, thanks to the kind people at The CW, I can tell you that the similarities between The Bachelor and Farmer Wants a Wife include:

The funniest thing about the episode, besides the Chicken Egg Ceremony, was all but one of the ladies showing up in their high heels.

The smartest thing about the episode is the reasoning the farmer gives for why he kept one of the ladies around.

The dumbest thing about the episode, besides most of the women being significantly younger than he is, was the small interview segments that introduced the ladies. Some of the things they say about why they are doing this or what they think could happen are just bizarre. Especially, since almost nobody ever actually finds real love or even a decently long relationship on these shows.

For the TVaholic, it looks like it will actually be the second best option in its Wednesday time period behind Criminal Minds on CBS, as I would rather watch Farmer than the America Idol Results Show on FOX, Deal or No Deal on NBC and Supernanny on ABC. But, that doesn’t necessarily mean that I will be watching it. What about you, do you think you will be watching, given the competition?

Farmer Wants a Wife debuts next Wednesday, April 30th after America’s Next Top Model on The CW. If you check it out, come back and tell us what you thought of the latest in reality dating?

Previous: Tonight on the Tube: Back to You, Law & Order, MythBuster & Men in Trees