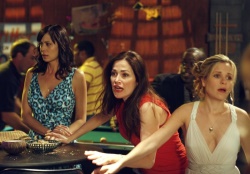 Quick Synopsis: Aftermath of the bomb.

Long Synopsis: It is four days later from where things left off in the season one finale, with Marilyn’s husband walking into the Hump Bar strapped with a bomb. Pamela is talking on the radio about how she feels about what has happened, as she does the show flashes back to the subsequent four days, revealing what happened to each character and how they are dealing with the aftermath of the bomb.

Review: Army Wives returns for its second season with the first of 19 new episodes on June 8th, 2008. It was a really good episode, although watching the screener, with the temp audio track, is never as good the final version that will air. Music is very important for adding to the tension, punctuating a moment or transitioning between scenes.

The way the story unfolds is very good for slowly revealing what has happened in the aftermath of the bomb at the Hump Bar. While a bit choppy at times, it does keep your attention, cause you don’t want to miss anything that is happening.

Each character gets plenty of time during the episode, so you can see how each is dealing with things. The most interesting of which is Roxy dealing with her children and not having heard from Trevor since he was deployed.

An episode like this is hard to review, because you don’t want to give anything away, but you want to convey whether it was worth watching and why. A lot happens is this episode that knowing ahead of time would completely ruin the watching experience. I will leave you with this though, if you are a big fan of Army Wives and have been anxiously awaiting its return, then you might want to have a few tissues handy. You’re probably going to need them. Check out some photos from the episode.

Looking forward to next week when I can hear what others thought about the Army Wives season two premiere episode and share a few more thoughts as well.