Jason the TVaholic Jun 5, 2008 Tonight on the Tube 0 comments 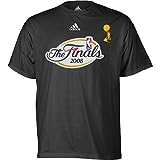 Over on cable, Bravo has the first season finale of Step It Up & Dance.

NBA Finals (ABC): Game 1. It’s the match-up that many were hoping for, the Boston Celtics vs. the Los Angeles Lakers. Game starts around 9:00 p.m. ET with a 30-minute pre-game show. A special Jimmy Kimmel Live: Game Night will air either before or after the game depending on your time zone. Like here in Seattle, Jimmy will be on after the game.

Swingtown (CBS): Series Premiere. A couple moves into a new neighborhood where they find themselves in the middle of the social and sexual revolution of the 1970s.

Good Eats (Food Network): Repeat. Alton tries to get things “Cobbled Together,” so he can join the Preservation of Culinary Heritage and Authenticity. Plays again later.
The Secret Life Of … (TBS): New. The history of the picnic is told. Plays again later.

The Next Food Network Star (Food Network): Repeat. Sunday’s fourth season premiere replays. See who was the first to go. Plays again later. Check out bios and photos of the people competing for their own show or a review of the episode.

Ace of Cakes (Food Network): Repeats. Get a look at “The Spy Who Caked Me” and then take in “Four Weddings and a Rat.” Both episodes play again later.

Previous: Tonight on the Tube: House of Payne, MI-5 & Men in Trees

Next: Tonight on the Tube: Charlie Jade, Doctor Who & Battlestar Galactica