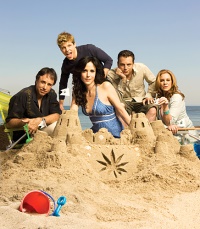 Long Synopsis: Agrestic and Majestic still burning, Nancy and family are trying to decide where to go. After letting Andy and the kids in on her helping the burning of the house along, they decide to head to the border beach town of Ren Mar and the home of Andy and Judah’s grandmother. When they arrive, they fine she is an invalid and being taken care of by Andy’s father Lenny, who doesn’t really care for either Andy or Nancy. Celia gets arrested for heading up the grow house. Her husband, daughter and Doug all put the blame on her.

Review: After watching Nancy ride off on the Segway with flames behind her, you had to wonder where they were going to take the show. The answer: to the beach and near the border. The burning down of Agrestic leads to a great opening and the last time it sounds like you will hear “Little Boxes,” as each scene has either flames or smoke in it and the second episode has no opening theme.

This is the first of many changes, as suburbia is left behind. It has allowed the creators to completely reinvent the show, but it is still very much the same. They may have new locales and situations, but same characters dealing with them.

The best part of the episode is the introduction of Lenny, played by Albert Brooks (The Muse, Defending Your Life), as Andy and Judah’s father and Nancy’s former father-in-law. It ads an interesting new dynamic to the show and gives you some nice background on how Andy and Judah grew up. He is also very funny.

Season four of Weeds premieres tonight, Monday, June 16th on Showtime. It is by far the best thing on in the third hour of primetime on cable or the networks.

Next: Review: Secret Diary of a Call Girl – Series Premiere on Showtime