On Thursday, December 4th, I had the opportunity to sit down with Gina Bellman (BBC’s Coupling) and executive producer & director Dean Devlin (The Librarian, Independence Day) to talk about their new series Leverage premiering tonight on TNT.

I was able to ask a total of 13 questions in the just over 25 minutes I got to spend with them at the beautiful Fairmont Olympic Hotel in downtown Seattle. There were five directed to each and three were for both. We talked about: 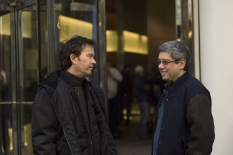 Since transcribing is one of my least favorite things and the interview recording came out so well, I thought I would just put the audio out so you could listen for yourself. I’ll be really interested to hear what you all think, since this was my first exclusive in-person interview. Also, read my review of the first episode and check out some photos of the cast.

Next: Tonight on the Tube: Chuck, Terminator, Big Bang Theory, How I Met Your Mother & Prison Break