Jason the TVaholic Jan 8, 2009 Tonight on the Tube 0 comments 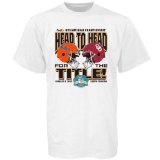 Will be on TV Talk with Shaun OMac later today. The show starts at 3:00 p.m. PT and I, along with Amrie from Seat42f, among other places, will be on in the second hour at 4:00 p.m. PT, so why not drop on in and listen live. Also, you can call in or join the chat room.

My Name Is Earl (NBC): New. Earl is trying to help out a woman that used to baby sit him. Runs 30 minutes.

Grey’s Anatomy (ABC): New. Bailey is working with Seattle Grace’s new pediatric surgeon. Izzie lets Alex in on who she has been seeing. Runs 61 minutes.

Private Practice (ABC): New. Oceanside gets quarantined due to a measles outbreak. Pete and Violet are thinking about where their relationship should go. Starts a minute after the hour and runs 59 minutes.

FedEx BCS National Championship Game (FOX): Oklahoma (1) vs. Florida (2). Well, it’s the only game that actually means something, even if other teams should have gotten a shot at the title. Looks to be a high scoring affair. Broadcast starts at 8:15 p.m. ET.

Ace of Cakes (Food Network): Repeats. Cakes for the Armed Forces and Avenue Q are made. Both episodes play again later.

A&E has 20 hours of The First 48 episodes.
Bravo has eight episodes of The Millionaire Matchmaker.
Nickelodeon has 18 episodes of George Lopez late.
Oxygen has Snapped episodes all day.
Sci Fi has 11 episodes of Stargate Atlantis.
Spike has nine episodes of Unsolved Mysteries.
TNT has five episodes of Law & Order.