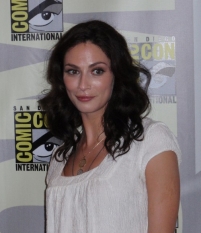 One of the fun things about Comic Con, is you never know what is going to happen. In this case it was ending up at a table by myself in the Warehouse 13 pressroom to interview the cast. There were plenty of others in the room, as you can tell from the background noise on the recording, but it was fine by me. Normally, you’d be at a table with four to seven others asking questions. So, getting to be one on one was pretty cool.

It has taken me awhile to start posting these, cause the background noise was so bad, but I have been able to clean the audio up a bit and it sounds much better now. As in, you can actually hear the questions and Joanne Kelly’s answers.

Of the four members of the cast, this is my favorite interview. So, I’m posting it first. Why is it my favorite? Well, cause I ran out of questions before they came to take Joanne off to another table and we spent the last three or so minutes just chatting about Comic Con.

So, what did you think of the Joanne Kelly interview? Is there something you would have asked? Let me know in the comments.

Next: Tonight on the Tube: Dinner: Impossible, Leverage & Dark Blue