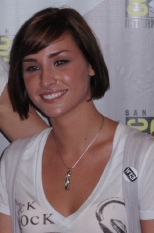 As I mentioned previously on the Joanne Kelly Interview post and again on the Saul Rubinek Interview post, the fun of Comic Con is that you don’t always know what might happen next. In this regard, getting to interview the cast of Warehouse 13 individually at a table by myself in the pressroom that followed the panel. Normally, you’d be at a table with four to seven others asking questions. So, getting to be one-on-one was a highlight of the experience.

I’ve attempted to clean the audio as best I can to get rid of the background noise, but there is still some. Also, since the recorder was pointed towards her, she comes in a bit clearer than I do. But, overall you can hear the questions and Allison Scagliotti’s answers pretty well.

I only got about four and half minutes to interview Allison Scagliotti.

So, what did you think of the Allison Scagliotti interview? Is there something you would have asked? Let me know in the comments.

Previous: Tonight on the Tube: 10 Things, Warehouse 13 & The Cleaner