Tonight on the Tube: Band of Brothers & 38 Other Memorial Day TV Show Marathons 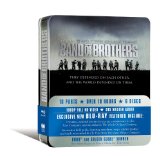 Tonight, ABC has the second season premiere of True Beauty.

On this Memorial Day holiday you’ll find a lot of TV show marathons running. Like, Band of Brothers, Beverly Hills, 90210, Bewitched, Bizarre Foods With Andrew Zimmern, Bridezillas, and 34 other shows that don’t start with a “B.” See the entire list below.

Lie to Me (FOX): Repeat. The last episode of this second season to play, “Tractor Man,” replays, where it seems that a disgruntled farmer is threatening to bomb the capital. Season two resumes as of next Monday, June 7th.

Saving Grace (TNT): New. Grace has to face judgment from a higher court for what she has done in her life. But, Earl is on her side, so she might just have a chance to beat the system. Plays again later. The series finale is in three weeks on June 21st.

Next: Tonight on the Tube: Glee & Justified