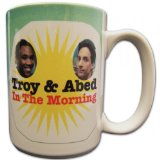 On cable tonight, TLC has the series premiere of Pawn Queens.

NBC announced that as of January 20th, 2011 they are going to expand the Thursday night comedy block to three hours. The new lineup will be Community, Perfect Couples (New), The Office, Parks and Recreation, 30 Rock, and Outsourced. Not sure how well it is going to work, but they don’t really have anything to lose. While the ratings may drop some for the comedies in the third hour, they’ll probably do better than The Apprentice has done this fall. What do you think of the move?

Community (NBC): New. Dean Pelton finds that Jeff has a class on his schedule that doesn’t exist. Abed and Troy build a gigantic fort out of blankets.
30 Rock (NBC): New. Liz participates in a crew lottery. The writing staff finds out that Jack has voiced an online dictionary’s pronunciation guide.

Grey’s Anatomy (ABC): New. Derek gets the grant he needs to start his clinical trial and takes the attendings out to celebrate. Meredith and Alex have to deal with the night shift on their own. Run 61 minutes.

Burn Notice (USA): New. Michael is trying to keep some chemical weapons out of the wrong hands and must work with an enemy to do so. Plays again later.

Fringe (FOX): New. In the alter-verse, a case hits home for Broyles after a young boy goes missing. Olivia asks Henry for help, as she attempts to cross back over to her universe. This is a great hour, well 44 minutes without commercials, of television and continues what has been an excellent season thus far. Everything builds nicely to a great ending that sets the table for the Dec. 2nd episode, as the show won’t be on next week for Thanksgiving. If you’ve loved this season so far, you’re going to love the next couple episodes.

The Mentalist (CBS): New. Jane accepts help from an astrologer that insists on helping with a triple homicide the team is investigating that involves two dead cops and Red John.

What alternate universe will you be traveling to tonight?

Next: What to Watch Tonight: Smallville, The Good Guys & More