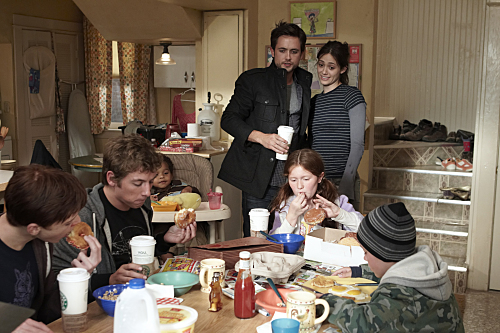 Synopsis: The show follows the Gallagher family living in Chicago. The mother is long gone and the father might as well be, as he spends most of his time getting drunk and partying away the money he is scamming from the government. The eldest daughter holds this large family of six kids together with some help from her brothers and sisters. She meets a handsome young man after her purse is stolen and the oldest brother finds out some unsettling news about one of his brothers.

Review: Shameless is a family drama that has been adapted from a British TV series of the same name. As it happens, I didn’t even know the British version existed until after I had watched the first three episodes of this version.

This version is very good, with a standout performance by Emmy Rossum (The Day After Tomorrow). But, felt it suffered from the “hey look at me, I’m on premium cable” trappings that many shows on these outlets do. Some elements were a little bit too in your face and not needed to get the point across. Just because you can do something, doesn’t mean you should.

But, once I found out about the original, I decided to see if it was available at Netflix and it was. So, I watched the first episode and you know what? Showtime’s version is almost a shot for shot remake of the original. I mean, other than a couple of added/extended scenes in this version, they are almost identical. All the elements I felt weren’t needed were all present in the original. So, turns out it wasn’t the trappings of premium cable that was responsible for elements of this version, it was cause they aped the original that contained all of these things.

Haven’t gotten around to watching subsequent episodes of the original, but the preview at the end of the first episode looks a lot like what happens in episode two of this version. So, not sure if or when the stories ever diverge. But, as of right now, if you’ve seen the original, then you’ve pretty much seen this one. Just with British accents and idioms instead of American ones.

The small additional scenes in this version were actually useful for setting the scene and helping the viewer understand the family’s situation financially and how they all get along.

While William H. Macy (ER) is front and center in all the promotional materials, this show belongs to the aforementioned Rossum. The series really revolves around her character Fiona Gallagher, the eldest daughter, and she is more than up to the task. Macy is good as well, but his character of Frank Gallagher, the drunken father, is almost a supporting player. Everybody else in the cast is really good too, but Rossum is really the reason to watch.

Overall, Shameless is worth checking out, even if it’s a shameless copy of the original. Luckily, they cast really well, so this copy didn’t turn out to be another pale imitation.

Next: What to Watch Tonight: Californication S.4 Premiere and Series Premieres of Episodes & Shameless