Jason the TVaholic Feb 6, 2011 Tonight on the Tube 0 comments 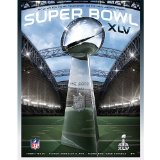 Super Bowl XLV (FOX): Pittsburgh Steelers vs. Green Bay Packers. Broadcast starts at 6:00 p.m. ET after a day of pre-game shows. I’m rooting for the Packers, what about you? Or, will you be just watching for the commercials? Or, not watching at all?
Glee (FOX): New. It plays directly after the football game. Coach Bieste and Mr. Schuester try to bring the glee club and the football team together. Sue is trying to win nationals. New Directions does Michael Jackson’s “Thriller.” Runs 66 minutes.

Next: What to Watch Tonight: House, The Chicago Code Series Premiere & Castle