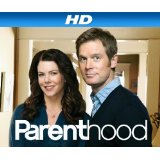 Raising Hope (FOX): New. Maw Maw falls for a guy at the daycare. Sabrina thinks that her boyfriend may be cheating on her. Starts a minute after the hour and runs 30 minutes. Solid episode.

Parenthood (NBC): Season Finale. Amber has been in an accident. Adam is sure what to make of Max’s recent behavior. Julia helps when a woman goes into labor. Crosby wants Jasmine to see the house. Can’t believe the season is over already.

A&E has six episodes of The First 48 tonight.
BET has 20 episodes of The Game.
Bravo has seven episodes of Millionaire Matchmaker.
Oxygen has 12 episodes of America’s Next Top Model.
Syfy has the last five parts of Steven Spielberg Presents Taken.
USA has 18 episodes of Law & Order: Special Victims Unit.
WE tv has five episodes of Bridezillas early.