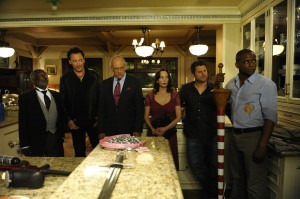 I had the chance to visit the set of Psych up in Vancouver, B.C. with a group of TV bloggers during the filming of the show’s 100th episode, “100 Clues.” While there we got a chance to interview the cast, which included guest stars Christopher Lloyd, Martin Mull and Lesley Ann Warren. Psych’s 100th episode is an homage to their classic comedy Clue. The group interview took place on the police station set and covered the following.

Previous: TV Monday: How I Met Your Mother, The Following, Castle & More