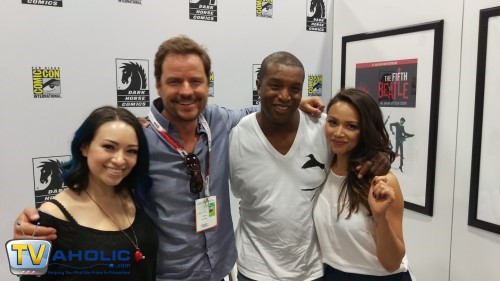 Last week I had the chance to interview some of the cast of Syfy’s Dark Matter at the Dark Horse Comics booth during San Diego Comic-Con. I had five minutes to talk with Jodelle Ferland, who plays Five, Anthony Lemke, who plays Three, Roger Cross, who plays Six, and Melissa O’Neil, who plays Two. But, five minutes isn’t all that much, so I ended up pooling my five minutes with Kyle Nolan (@kyool) from NoReruns.net (@NoReruns) and Tina Charles (@TinaCharlesTV) from TVGoodness.com (@TVGoodness) and we talked with them for fifteen minutes.

Also had a couple of questions for co-creator Joe Mallozzi, but he had stepped away while we were interviewing the cast. Yet, was later able to get them answered via email.

Question: From what I understand, Dark Matter was originally pitched as a TV series and then became a comic

and is now a series. Could you talk about why you think it didn’t originally get picked up to series, how it then became a comic and what sparked it now becoming a TV series?

Mallozzi: It’s not that I didn’t have confidence in it becoming a series. I simply weighed the odds and, given my background in development, knew the project would have a better shot at being picked up if it was presented as an established property instead of an original pilot pitch. As a result, I approached Dark Horse Comics about launching Dark Matter as a four-issue limited series first and then shopping it as a television series. Dark Horse came on board, were incredibly supportive in launching the book and collecting the four issues into a trade paperback. This trade paperback proved an invaluable visual sales tool for Prodigy Pictures President Jay Firestone when the time came for him to try to sell the show.

Question: What are your influences for the story? For instance, are there any sci-fi novels, other shows or films that have inspired Dark Matter? What was the original genesis of the idea for the show?

Mallozzi: I’ve always been a fan of “bad guys”, from comic book villains to James Bond antagonists, and the theme of redemption is something I’ve explored in countless stories (in Stargate on television, in the short story “Downfall” I wrote for the Lou Anders’ superhero anthology Masked). Likeable bad guys are hard to pull off but, when you’re successful, they can be the most rewarding of characters. A great, very different example of this was the character of Richard Woolsey from Stargate who started off as a pencil-pushing weasel and, over the course of several seasons, became downright endearing as we explored his backstory.

From a big picture sense, my biggest influences were a television series called The Shield and a comic book series called The Thunderbolts. Both the first episode of The Shield and the first episode of The Thunderbolts ended with an enormous WTF?! moment that established our “protagonists” as “bad guys”, then spent the entirety of their run redeeming them in the eyes of the viewer. The premise of Dark Matter is particularly engaging because our antiheroes are on the same Square #1 as the audience, perhaps horrified by their backstories but determined to start over – all moving forward together on these respective journeys of self-discovery. Will they be successful remains to be seen. All I’ll say is that, like in real life, it won’t be a happy ending for all.

Tonally, our biggest influence is, of course, the Stargate franchise which we worked on for over a decade, balancing action and drama with humor. An anime called Cowboy Bebop was a huge influence. Other inspirations include The Dirty Dozen, Blake’s 7, Farscape, Firefly – but with a heavily serialized format that takes a page from the cable shows I’ve enjoyed: The Sopranos, Breaking Bad, Game of Thrones.

Dark Matter plays Fridays on Syfy. We are about halfway through the season as of tonight’s episode. Have you been watching? What do you think about the show? Have you read the comic?