NBC’s Telenovela: Is This New Eva Longoria Comedy Worth Checking Out? 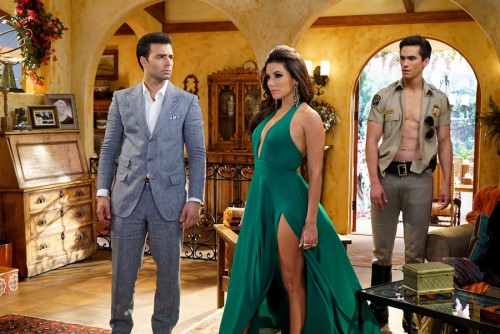 Telenovela follows the on and off stage lives of the stars of a popular Spanish language soap opera and just like a real telenovela, it is full of drama, life and death, love and hate and of course twists. Despite all the chaos, this telenovela’s cast and crew is a family. Or, at least, they are trying to be.

I like Longoria and Riva and think that a workplace comedy taking place on the set of a telenovela is a great idea for a sitcom, but after two episodes this one just isn’t working for me. Too much of the comedy is telegraphed. Yet, with the people behind it and in it, it does feel like it has some potential. Yet given episode order cuts and this weird introduction it is getting a month before it will air regularly, I’m not sure it will get a chance to attempt to reach it.

Watch the Trailer for Telenovela

Will you be checking out NBC’s Telenovela when it premieres on Monday, December 7th following The Voice with a two episode special preview. It will start its regular run on Monday, January 4th following new comedy Superstore.