Should You Join FOX’s Houdini & Doyle on Their Mysterious Adventures? 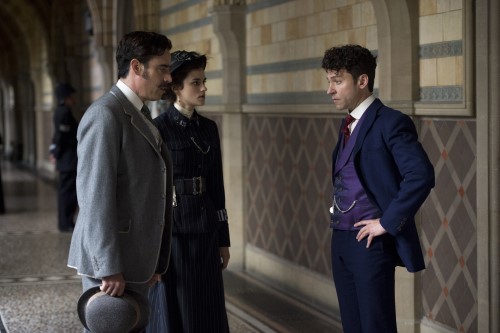 Houdini & Doyle flows master magician, escape artist and paranormal debunker Harry Houdini and prolific writer, creator of “Sherlock Holmes” and paranormal aficionado, who end up consulting for New Scotland Yard to investigate unsolved, inexplicable and possibly supernatural crimes. They are teamed with the first female Constable Adelaide Stratton. They take on the cases cases that nobody else seems to be able to solve and will challenge their sense of what is real and what isn’t. Each brings their diverse viewpoint to crime solving investigate cases involving vampires, ghosts, monsters and poltergeists… or maybe those are just being used to misdirect and conceal the real cause?

I enjoyed the first episode and found it to be a lot of fun. Mangan has been great in Showtime’s Episodes and is very good here as Doyle. I’ve always liked Weston when he’s appeared in various things and it’s nice to see him in more than a one-off or guest stint. Being set in 1901, Houdini & Doyle comes off like an early 20th century The X-Files, but goes for a bit more comedy, with Houdini in the skeptic Scully role and Doyle in the believer Mulder role. The first episode really plays more like one of the fun alien/supernatural type episodes of ABC’s Castle, where ultimately there is a rational explanation for the crime. I like that the magician is the supernatural debunker and the creator of the deductive reasoning Holmes is the supernatural believer. On the face of it, you’d think it’d be the other way around. I look forward to following their adventures over the nine episodes that follow.

Watch the Trailer for Houdini & Doyle

Will you be checking out FOX’s Houdini & Doyle when it premieres on Monday, May 2nd following Gotham?