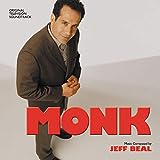 It is sci-fi Friday with the two Stargates but really I find Monk and Psych on USA to be a lot more fun. Which do you watch and why? If you watch neither let us know why in the comments also.

24 (FOX): Repeats. Two episodes where the action takes place between 5:00 a.m. and 7:00 a.m., which is where Homeland Security takes over CTU and it is not the smoothest of transitions.

Numb3rs (CBS): Repeat. An Iraqi activist is killed and the team must find who is responsible before more problems arise.

NCIS (CBS): Repeat. Ziva is investigated when a prisoner in her care dies and the director is kidnapped.

Kyle XY (ABC): Repeat. Mondayâ€™s episode is replayed where Kyle gets his first lesson in dealing with the female of the species and romance. Also we learn more about the creepy guy who has been following Kyle.

Monk (USA): New. Monk steps in to coach Natalieâ€™s daughter Julieâ€™s basketball team after the coach is murdered so he can figure out what happened.

Psych (USA): New. A case, a wedding and a fake psychic sounds like fun.