Review: Side Order of Life – Series Premiere on Lifetime 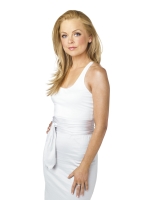 Quick Synopsis: A woman gets a wakeup call and begins to change her life for the better.

Long Synopsis: A young professional photographer for a magazine is about to be married to a successful man with a great job. When her best friend tells her that her cancer has returned, she begins to take a look at what her life really is. This news leads her to postpone her wedding and for some reason become better at her job. Her photos are so impressive compared to her normal work that her boss, and friend, gives her a promotion.

Review: Side Order of Life gets right to the main course, as it does a great job of introducing all the main characters before the first commercial break. Like with State of Mind, I didn’t know what to expect from this Lifetime show. Being male, I am not exactly in their core demographic. But, Side Order of Life may just be the best show they have this summer. It draws you right in from the beginning, even more so than State of Mind did, and it leaves you wanting more at the end. This show too, is better than Army Wives, which is already a hit. It looks like it could be a really good summer for Lifetime.

Side Order of Life’s opening sequence has the feel of a big screen movie, which is not surprising considering the executive producers behind the show. Dan Jinks and Bruce Cohen is the Academy Award winning duo responsible for American Beauty

and other big screen offerings like Down with Love

. Their first foray into television is the ABC summer series Traveler. They are also behind the upcoming Fall ABC series, Pushing Daises.

Marisa Coughlan (Boston Legal, Wasteland), who is absolutely radiant on screen, plays Jenny McIntyre, a 30 year old who has a good job, as a photographer for a magazine, a great guy, who she is about to marry, and what seems to be a pretty good life all around. Then she gets a wakeup call from her best friend Vivy Porter, played by Diana Maria Riva (Studio 60 on the Sunset Strip).

When Vivy tells Jenny that her cancer has come back, plus a few other bits of tough love about her life and upcoming nuptials, Jenny’s life begins to change, as she starts to reevaluate where she is in her life. Jenny starts seeing things that aren’t there or hearing messages that are only for her, which starts to drive her a bit crazy. But, they are all pointing her in a new direction, a new path. She also starts to get noticeably better at her job. This puts the show into the quirky dramedy category.

So, are there any shows that Side Order of Life reminds you of? Well, it has aspects of Grey’s Anatomy

. It has the dual meaning layered storylines of Grey’s Anatomy, as in how a patient’s storyline is a corollary to what the problems are of the main characters, and the offbeat quirkiness, the universe is telling you what to do, of Wonderfalls. If you like either, or both, of these shows, then you might just like this one.

I new the show was a winner when at the end of the preview screener I was watching, I was disappointed not to be able to see any teaser clips for the next episode, like will play at the end of the show when it debuts tomorrow night, Sunday, July 15th. Side Order of Life will kick off Lifetime’s new three-hour block of scripted programming.

Although, I am always a little bit worried when certain actors are starring in new shows that I like, no matter how good the show is. In this case it is Jason Priestly, who plays Jenny’s fiancé, Ian Denison. After Beverly Hills, 90210

, he has been on two really good shows that each saw an early demise, see Tru Calling

and Love Monkey. I really hope that Side Order of Life is the show that allows him to breakout of that mold, as it is really worth checking out.

What do you think of Side Order of Life? Let us know if you agree or, if not, where we went wrong.

Next: Tonight on the Tube: Side Order of Life, State of Mind, The 4400 & Entourage