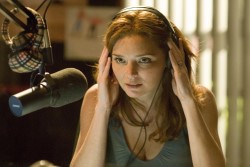 Quick Synopsis: The episode title just about says it all.

Long Synopsis: Well, just about everyone is saying goodbye to someone, but to say who is saying goodbye to who might just ruin the fun of watching the episode. I will say that they leave it in such a way that you will be anxiously awaiting the show’s return in 2008, when they say hello again, with 18 new episodes. But, basically the post is on high alert, as some explosives have been stolen from the weapons depot and it is the second such theft to occur recently. As intel is gathered, it is determined that the post could be a terrorist target, so troop deployments are moved up. And, then …

Review: While in this reviewer’s opinion, Army Wives is not Lifetime’s best show; it has been their most successful show. No show has brought a bigger audience to Lifetime on a more consistent basis in its 23-year history.

Army Wives started out as a slightly above average show with a really good-looking cast. But since, the cast has become a cohesive unit, as they have really gelled over the show’s 13 episode first season. Each character has grown both separately and as part of the “harem.” This episode does a really good job of showing that growth.

In comparison to previous episodes though, this one moves along at a bit of a slower pace. All leading up to the final minutes, where … again, I guess you’ll just have to watch. It does do what a good season finale episode is supposed to do, leave you wanting more. If you’re a fan of Army Wives, this episode will do just that. And, the best part is, you already know that it is coming back, so you won’t be left hanging indefinitely.

The first season finale of Army Wives airs tonight, August 26th on Lifetime. What did you think of the episode? Let us know in the comments.

Previous: Tonight on the Tube: Masters of Science Fiction, Feasting on Asphalt 2, Mega Snake & The Murder of Princess Diana

Next: Tonight on the Tube: The 4400, The Kill Point Finale, Army Wives Finale & Entourage