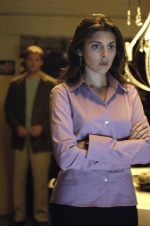 Long Synopsis: The doctor continues searching for his wife, still not believing that witchcraft exists. When the teacher at his daughter’s school ends up in the hospital with the same unexplained illness that he dealt with once in the past, he is offered an incantation and process to overcome her sickness. He starts to learn that some very powerful people are behind his wife’s disappearance. When these people decide that he is getting too close, they try to take him out. But, they fail when it turns out his daughter is home and, not knowing what she is doing, saves her father with her mom-like abilities. The daughter then uses her powers to figure out where the witch’s coven is doing their dirty work. The doctor, cop and another go there to try and save them.

Review: The Gathering is a Lifetime Original Miniseries that stars Peter Gallagher (The O.C.), Jamie-Lynn Sigler (The Sopranos), Kristin Lehman (Drive, Killer Instinct), Jenna Boyd (Sisterhood of the Traveling Pants) and Peter Fonda (3:10 to Yuma, Ghost Rider). It is a two part, four hour miniseries that is executive produced by David Eick, the guy behind the re-imagined Battlestar Galactica and Bionic Woman, and John Shiban, who has had his hands in Supernatural and The X-Files.

The events in part two pick up right where part one left off. The story moves along at much the same pace. Unfortunately, the way it jumps from scene to scene, you feel like stuff is still being left out of the story. But, it continues to feel very creepy, which is what you want in a supernatural thriller.

Sigler’s teacher character does play more into the story than in the first part. Gallagher’s doctor Foster finally comes around to believing in what is going on. Boyd’s character really becomes the center of the ongoing story. All the performances are pretty good, other than Fonda’s wooden performance as real-estate mogul Thomas Carrier.

The Gathering miniseries leaves open the possibility of continuing the story. You are not left with a clean conclusion. When you see how it ends, you will want to know how that happened. You will also probably be interested in seeing how Zee deals with her abilities and how she learns to control them going forward.

Overall, it is a good miniseries, but didn’t really like being left hanging as much as we are in the end. Of course, if they continue the story in the future, then that criticism goes away.

What did you think of part two of The Gathering, or the miniseries as a whole?

Previous: Tonight on the Tube: Life, Chuck, Torchwood & The Gathering