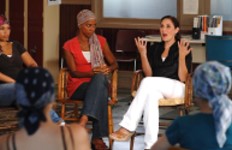 Next: Tonight on the Tube: Chuck, Heroes, How I Met Your Mother, Journeyman & Samantha Who?