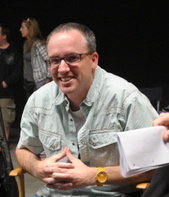 Back in June, TVaholic, along with five other online media outlets, had the opportunity to visit the set of Psych up in Vancouver, B.C. It was during the filming of next week’s episode, “Talk Derby to Me.” The episode revolves around Juliet, played by Maggie Lawson, going undercover in the world of roller derby.

One of the highlights of the trip was having dinner the night before with the writer of the episode, Tim Meltreger, and a couple of the guest stars, Sydney Bennett and Aliyah O’Brien. They played two of the main roller derby players in the episode. Bennett is a real life L.A. Derby Doll that skates under the moniker Racy DC. See below for a picture of the three of them that I took with my cell phone. It was a great night. I mean, what’s better than talking TV, great food and beautiful women?

The following interview was conducted via email. I sent him seven questions and you can read his responses below. I was trying to get at how an episode of Psych goes from idea to what we enjoy watching on TV. I think it accomplishes that and hey, I also found out that my writing process is very similar to that of a professional TV writer. Let me know what you think.

1. Could you tell us about your journey to becoming a writer on Psych? Is being a TV writer something you ever thought you would be doing?

I began working for Psych during the show’s first season producing online content for the USA Network’s Psych website: webisodes, character profiles, blogs, and a lot of material for site’s interactive element. It was a pretty great gig, I had been working as a freelance journalist and this was a completely different direction for me. By the middle of the second season, the work I did online somehow managed to get the attention of the show’s producers, who offered me an episode assignment in the second half of season two. This resulted in my first Psych credit, episode 2010, “Dis-Lodged,” which ultimately led to my current position as Staff Writer. Fortuitous. 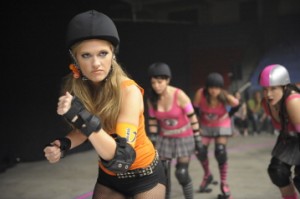 2. How did you get the idea for “Talk Derby to Me” and could you tell us how the pitch process works on Psych and how the story arc for a season is put together?

“Talk Derby to Me” originated as a world we wanted to explore with our characters. Roller Derby has an almost cultish following, but the sport is on its way to becoming all the rage, especially here in L.A., where we have a team called the L.A. Derby Dolls. Their bouts are very popular, and the more I got into researching this episode, the more it became clear that not only are there female roller derby leagues in almost every major American city, but this was really an exciting arena for Shawn and Gus, but also for Juliet, who gets to skate her heart out while investigating some nefarious activity. We
also just really wanted to name an episode after a Poison song.

The pitch process varies, but most of the time episodes begin with a hook, like Andy Berman’s pitch for Season One’s “Nine Lives,” which follows the investigation of a murder that had one witness – a cat. It’s an irresistible idea, not unlike the pitch for “Derby” – Juliet goes undercover on a roller derby team – and if you can get everyone saying, “I want to see that episode,” then you’ve got a successful pitch.

3. With different writers each week, what tools, structures, etc., are in place to maintain the same feel from episode to episode?

Good question. We have different writers each week, but we’re all in the same room beating out every story together, so the Psych sensibility is maintained because we’re all familiar; with each other and with our stories. In the end, the voice of the show, Steve Franks, will make a pass on each of the scripts before they’re shot, ensuring each episode feels like a Psych episode.

4. Could you talk about your writing process: Do you have a favorite place you like to write, how do you go from idea to first draft, how do you know you’re finished, etc.?

Let’s see. Avoidance. Procrastination. Panic. Those are the hallmarks of my process. Writing is a weird job because it’s unpredictable. You might be at work for nine hours, but only get two hours of productivity. My objective is to even out that ratio as best as I can, which can be tremendous challenge.

As for places to work, I need to be here at the office breaking stories with my comrades, but when I do get the chance to go mobile, I’m a fan of hotel lobbies. I live in Orange County, and I get a lot of work done at the Grand Californian hotel near Disneyland. In terms of the process, writing is simple – you just need to do it, but as any writer can tell you, there are always more reasons NOT to write than there are TO write, even when matters are pressing. This is why a writer requires discipline above all else. This is especially true when you’re writing a first draft, because no matter who you are, a first draft is going to be awful, and no one wants to work on something awful. But it’s part of the process, so it’s absolutely necessary.

5. Once you have a script, what is the next step in the process before filming begins?

A Psych script is taken through a series of drafts and several rounds of notes. First we pitch and then we make a detailed outline of the beats of the story. We get notes and then revise the outline, which then goes to the studio and network executives at USA, who weigh in. These notes become part of the script’s first draft, which is in turn subject to more notes from Psych’s producer. Then, it’s another draft, which is sent to the studio, where the execs again give feedback. Then it might be a few more rounds of notes, perhaps a pass by the entire staff for jokes or logic or to cut out really expensive shots and setups, and then it’s a shooting script, which is then subject to further revisions and tweaks when cameras roll in Vancouver. It’s a very long process, but always enlightening.

6. On Psych, writers are on set for the filming of their episode. What types of things, re-writes, ad-libs, etc., do you have to deal with during filming? Could you share any good stories from this episode?

It’s important to note here that the Psych cast always brings something to the story. They’ve read it and will often have little pitches for the writers when the show is being shot which result in all kinds of enhancements. The director, too. Everyone wants to make the story better or clearer or funnier. On “Derby,” there’s a scene just before the first commercial break that simply had Shawn asking Juliet, “Can you skate?” But, when we blocked and rehearsed the scene, James Roday came up with a much cooler way to reveal that question, and it made for a clever end to the scene that I would have never thought of. That happens a lot.

7. Once filming wraps, do you have any other responsibilities for the episode? When do you get to see the final product?

After an episode is shot, the writer is mostly done with it, unless there are problems once it’s cut together by our post-production staff. Story points might not be as clear as we wanted them, and in this event, it may be necessary to re-shoot some stuff. Well, someone needs to write this, right? Fortunately, this is the exception rather than the rule, and most of the time, the writer gets to sit back and watch their episode take shape in editing: a directors cut, and then a producer’s cut, and finally a studio cut. Music is added and the finished product is delivered. We always watch the episodes together right when they’re done, not just because everyone enjoys seeing what jokes and bits made the final cut, but also because we’re Psych fans, too. 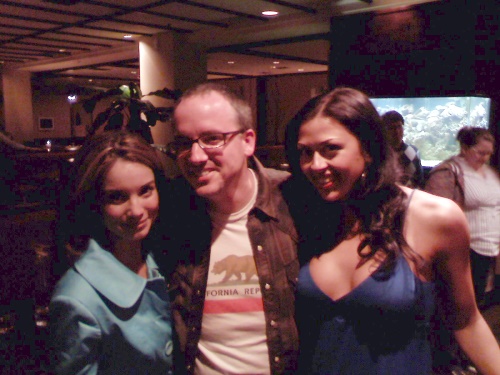 Tim will have another episode in the second half of this season that he is co-writing with Kell Cahoon, his office mate and the writer of last week’s “There Might Be Blood.” Tim’s episode, “Talk Derby to Me,” airs next week, Friday, September 5th after a new episode of Monk on USA Network.