Search
Menu
Categories
‹ prev next ›
0
The TVaholic Spends a Day on the Set of TNT’s Leverage
August 26, 2009 Jason the TVaholic Cable TV

Back on June 23rd I got a chance to visit the set of TNT’s Leverage. They are shooting season two in Portland, OR, which is just a few hours down I-5 from me here in Seattle.

They were shooting tonight’s episode, “The Two Live Crew Job

,” the season’s seventh. It was originally scheduled to be the summer finale, but TNT will air two more episodes before wrapping things up for the summer. 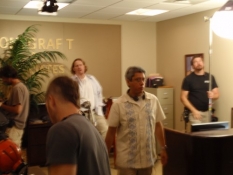 They were filming on location at the Portland Art Museum. Once I arrived and met the contact people and Joseph Dilworth from PopCultureZoo.com, we briefly chatted with Gina Bellman, who plays Sophie. I mentioned that I had interviewed her along with director and executive producer Dean Devlin last December when they were in Seattle promoting the first season of the show. 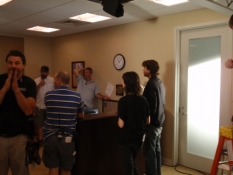 After that we headed downstairs to where they were shooting. Which I find funny because when you see the scene on TV, the team will be getting off an elevator on the 14th floor of an office building in downtown Boston. Got to love the magic of proper set dressing and film editing. The scenes in this episode where Nate and Sophie are talking to the receptionist and Eliot, Hardison and Parker take a left and walk down the hall and guest star Griffin Dunne comes out of another elevator at the beginning of the episode are the scenes they were filming during the time we were there.

We stood quietly in a room off to the side while they were shooting and then got a chance to see the cramped alcove they had turned into a reception area, while they were changing things to shoot from another direction. We weren’t able to actually see them filming here, cause of the small space, but got a chance to watch another scene later on. It was fun to see the episode and how these scenes were used.

We briefly got a chance to talk with Christian Kane, but just as we got started, he was called back to filming. But, he said we’d talk more later.

They finished filming the scene of the team getting off the elevator and began to prep the hallway for the next scene they were filming, which involved Parker, Hardison, and Eliot walking down the hall and guest star Griffin Dunne coming out of an elevator looking around and then walking out another door.

We went outside for a bit during this time, but then got to watch them film this a few times standing right behind director Dean Devlin. We were seeing what he was seeing on the screens in front of him. Then after a few takes, we moved down to the end of the hall to watch from behind were they were filming.

It was funny to realize that the hallway just ended and the three stars just stood there waiting for Dunne to do his part of the scene, which entailed them being out of sight even though they were standing right there. The scene looked like they just walked by the elevator alcove and kept going.

The other thing that was funny about this, is that the three of them were practically rolling on the floor laughing about something until action was called and they instantly returned to character and walked down the hall without a hint of what they had just been doing.

I think this camaraderie, if you will, between them when the cameras aren’t rolling translates into the great chemistry we see on screen each week.

We then went outside and talked with co-creator, executive producer, and writer John Rogers. The guy loves the show and you don’t need to ask any follow questions, cause once you get him going, he’s off to the races. Listen to our interview with John Rogers and hear for yourself. We got to spend about 25 minutes with him. 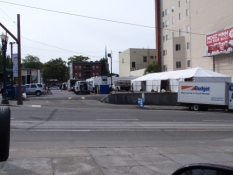 We were then invited to have lunch in the craft service tent, where a buffet of chili, potato skins, roasted pork, baked fish, steamed vegetables, salad, beverages and dessert. Can you say we ate with the stars of Leverage if we were in the same tent, but about eight tables away? Probably not, but a little while after everyone finished eating, Christian Kane came back out to talk with us for about 20 minutes. 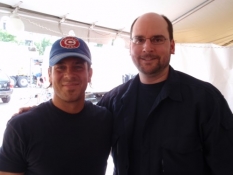 It was a great day. We got to watch them film, got a couple of excellent interviews and a tasty meal to boot. But, to top things off, this episode turned out to be my favorite of the season. The team going up against another crew provided so many great moments.

Are you enjoying Leverage as much as I am? What did you think of “The Two Live Crew Job?” Let me know in the comments.