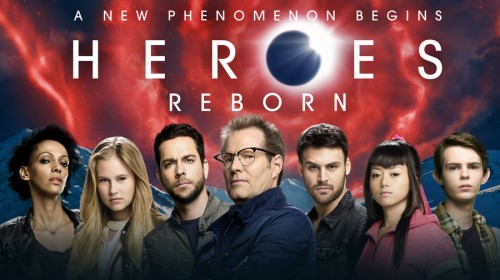 In this episode we preview NBC’s new event series Heroes Reborn. It stars Jack Coleman back as Noah “HRG” Bennet. Others that will appear at some point during the 13-episode run are Masi Oka’s Hiro, Greg Grunberg’s Matt Parkman, Sendhil Ramamurthy’s Mohinder Suresh, Jimmy Jean-Louis’ Haitian and a few others. The new cast includes Zachary Levi (Chuck), Judith Shekoni (EastEnders), Henry Zebrowski (A to Z), Robbie Kay (Once Upon a Time), Kiki Sukezane, Ryan Guzman (Pretty Little Liars) and more.

Heroes Reborn picks up five years after the end of Heroes where a year ago, a terrorist attack in Odessa, Texas left the city decimated. Blamed for the tragic event, those with extraordinary abilities are in hiding or on the run from those with nefarious motives. Major storylines introduced in the first couple hours are HRG getting back in the game after a conspiracy nut tracks him down and clues him into the truth behind what happened in Odessa. A couple of vigilantes that lost someone in the attack and blames those with abilities. A teen in hiding that doesn’t know how his ability works. A young woman trying to track down her missing father. And, a few others.

It was very interesting dipping back into the world or Heroes, let’s just hope this is more season one than subsequent seasons of that one.

Watch the Trailer for Heroes Reborn

Will you be checking out NBC’s Heroes Reborn when it premieres Thursday, September 24th with back-to-back episodes? I give my opinion and overview in the audio above, so take a listen and then let me know what you think in the comments or via Twitter @theTVaholic.

Next: theTVaholic Previews NBC’s The Player