Jason the TVaholic May 1, 2016 New on Netflix, TV on DVD/Streaming 0 comments 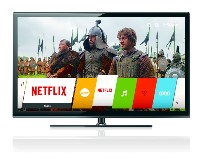 These are the TV shows hitting Netflix in May. Whether you are looking for something animated, a sitcom, a talk show, an action adventure series, something for the kids, a Netflix Original and more, there is always plenty to choose from. Shows are listed by date and then alphabetically. We’ve also added if previous seasons are available. Also, find shows leaving the service this month listed at the bottom. Will you be checking any of these additions out?

Leaving Netflix as of …