Should You Make Time for NBC’s Timeless? 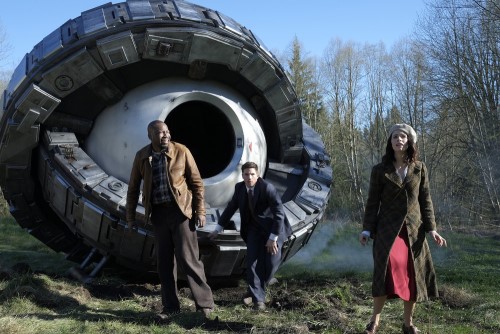 Timeless is a time traveling action-adventure series that follows a history professor, a scientist, and a soldier that have been brought together and tasked with tracking down and stopping the person who stole a secret state-of-the-art time machine, with which he could change the past and destroy the America we know. They must use the original prototype to travel back in time and try not to change things themselves while trying to stop him.

If you like time travel stories, then I think you will like Timeless. The cast is solid and the people behind it, Supernatural creator Eric Kripke and The Shield creator Shawn Ryan, have brought us some pretty good TV previously. I enjoyed the first episode, even if clunky in a few places. It looks like it will be a fun romp through America’s past with an interesting central mystery. It falls into the category of serialized-procedural. Where you’ll get an adventure of the week, but it will play into the bigger ongoing story, as they try to piece together motives behind the people who stole the time machine and attempt to stop them. Plus, you’ll get a little period costume drama in the middle of every episode, which, as far as I could tell, they did a good job of recreating the time period of the Hindenburg crash. I look forward to checking out more.

Watch the Trailer for Timeless

Will you be checking out NBC’s Timeless when it premieres Monday, October 3rd after The Voice?

Next: Tuesday TV: Brooklyn Nine-Nine, Marvel’s Agents of S.H.I.E.L.D., This Is Us & More