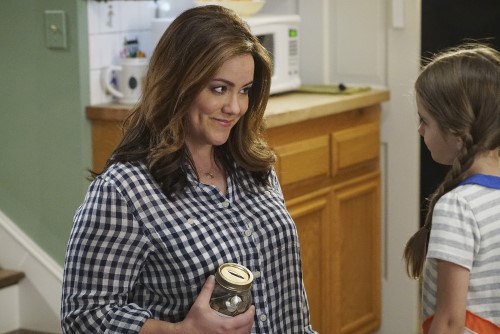 American Housewife is family comedy narrated by a strong-willed and unapologetic wife and mother of three raising her flawed family in the wealthy town of Westport, CT that is seemingly filled with perfect moms and their perfect offspring.

Was very interested in this one going in, with Mixon and Bader in the leads and Leslie Bibb (Popular) in a recurring role. I’ve liked them all in previous things and ABC has been on quite a hot streak in the family comedy category with the very funny Speechless joining the ABC lineup this year and recent funny additions like black-ish, Fresh Off the Boat and The Goldbergs and now long running stalwarts The Middle and Modern Family. But, this one just missed the mark. Unlike Speechless that finds its humor around a differently-abled child, not at his expense. This one feels more like it is making fun of one of the kids’ difficulties and the incessant fat talk is just too much. Especially, since she isn’t anywhere close to being “fat.” Whether coming from Mixon’s character or those around her, much of the comedy felt kind of mean-spirited to me. Also, the narration sort of works for an introduction, but I think it will get old fast, especially if it is a major part of the show going forward. I wish I could’ve seen more, as comedy is hard and many take a few episodes to find their way. But, as of now this one just didn’t work for me. But, you can always watch the superior Speechless.

Watch the Trailer for American Housewife

Does ABC’s American Housewife sound like something you’ll be watching when it premieres Tuesday, October 11th following The Middle and before Fresh Off the Boat?