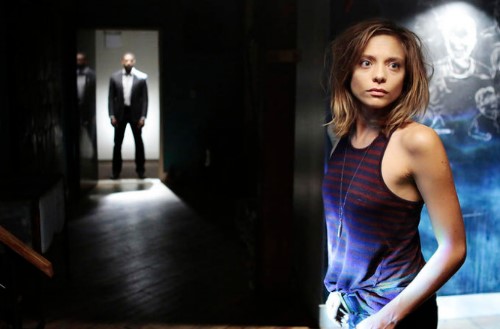 Falling Water is an intersection between reality and unconscious thought. It plays off the idea of that many have wondered of whether the events in our dreams are trying to tell us something? Here we follow the story of three unrelated people, who slowly realize that they are dreaming separate parts of a single common dream. Each is on a quest for something that can only be found in their subconscious. However, the more they begin to use the dream world as a tool to advance their quests, the more they realize that their visions are trying to tell them something more, and that their real lives may hang in the balance.

I was very interested in this one going in, given USA Network’s new direction with shows like Mr. Robot. So much so, that I stood in line, outside, for almost an hour at San Diego Comic-Con to watch the premiere episode, “Don’t Tell Bill,” with about a 1000 others. The vast majority of which were interested in seeing it as well, as the room had mostly emptied out from the previous panel and did so again after this was over. I was hoping it would give me some questions to ask the executive producers in the pressroom, but it only left me confused. Seems I was not the only one, as the episode received a tepid response with a smattering of courteous applause followed by a pretty quiet exit from the audience. This is not the response you get from something that has engrossed the crowd. And not the response you want from a group of people that are more likely than the average TV fan to like this type of show. After listening to the producers talk about the premise and how they are not trying to trick you. That they have provided the cues to help you learn the language of the show, so you will be able to follow what is a dream and what is reality. It made me feel like I had missed something, cause I got lost halfway through and having subsequently watched the second episode, don’t feel I am much better off. The premise is very interesting and there are some really good performances, I could watch Brochere all day long. I do sort of have a feel after two episodes, as to what each is looking for and how things might connect in the future, but not sure I will continue on with this one. It may be trying to follow in the footsteps of Mr. Robot, but I think it stumbles out of the gate. There is being confusingly intriguing and then there is this, which is confusingly not.

Watch the Trailer for Falling Water

Does USA Network’s Falling Water sound like something you’ll want to pick up when it premieres Thursday, October 13th? Or, you can watch the Falling Water premiere online now and see for yourself.