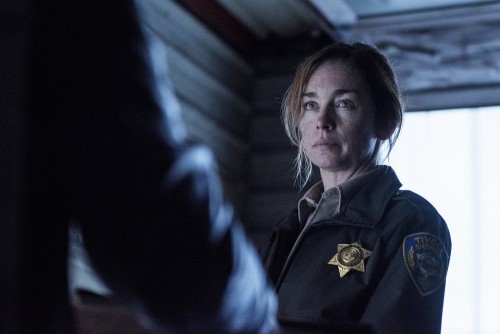 Eyewitness is a 10-episode anthology series based on a Norwegian crime thriller. It follows two teenage boys that witness a triple-homicide. They decide not to tell anyone, since one doesn’t want anyone to know what they were doing there. Yet, it looks like someone walked away from the massacre and they are looking to silence anyone that may have seen them. Meanwhile, the sheriff begins investigating, but finds she keeps bumping up against an FBI case that is connected.

While I haven’t watched a lot of Norwegian TV, or any at all really, this did remind me of some of the British cop dramas I have liked, like Broadchurch. It has a similar feel in its pacing, how it is shot and how the story unfolds. The cinematography is excellent, as it really gives you a sense of place. The cast for the most part is really good. I’ve always liked Nicholson and continue to here, as she and Bellows play well off of each other, as does she and Murray, she and Young, and she and Jones. But, not everything is good though. Paxton’s Lukas falls into the annoying teenager category and some side characters are kind of over-the-top. Overall it’s very good, unlike USA Network’s other recent offering, Falling Water, I was in after the first episode. But, watched two more before doing this preview and I look forward to checking out the remaining seven. I also like that given it’s an anthology, we are going to get resolution to the story. And, if it does well, we could get another season that would follow another case, set in another place, with a new eyewitness. And, even if it were to fall off a cliff in the second season like HBO’s True Detective, we’ll still have what looks to be an excellent first season that can stand on its own.

Watch the Trailer for Eyewitness

Does USA Network’s Eyewitness sound like something you’ll want to watch when it premieres Sunday, October 16th?