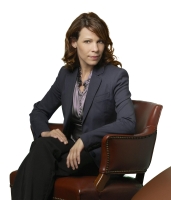 Quick Synopsis: A therapist needs a therapist of her own.

Long Synopsis: An old Victorian house is the home of the New Haven Psychiatric Association where we see the lives of the therapists and their socially awkward office manager intermingle. When Dr. Ann Bellows, played by Lili Taylor (Six Feet Under) walks in on her husband getting it on with their marriage counselor, her life is thrown for a loop. While trying to cope with this news, she still has to do her job, which includes counseling a bickering married couple. Her colleagues try to comfort her to varying degrees of success. Meanwhile the child psychologist of the group is dealing with an angry young Russian boy and his adopted parents. Dr. Bellow’s husband was one of the fellow tenants in the association, but has been summarily ejected from his office. Having to find a new tenant, she comes across a young lawyer who has recently moved to town and offers him the space, which he accepts.

Review: The TVaholic is not exactly part of the core demographic of Lifetime, me being male and all, but that being said, I still check out their scripted offerings from time to time. So, when I first popped in the DVD “Pilot” screener for State of Mind and another Lifetime show, Side Order of Life, my thoughts first went to the recent Army Wives. That show has been Lifetime’s most successful original scripted drama to date and is pretty good. But, then my mind turned to thoughts of “chick flicks” and the likes of other recent offerings like Angela’s Eyes, Blood Ties and Monarch Cove, none of which were really all that good, although I liked Angela’s Eyes.

The show’s description states, “State of Mind is a quirky and comedic drama series centering on New Haven Psychiatric Associates.” I would have to agree. It has the type of offbeat quirkiness we have seen before in shows like FOX’s Ally McBeal

or the recently short-lived Raines on NBC. While not as silly as Ally McBeal (no dancing babies in the “Pilot”) or as serious as Raines (she doesn’t see dead people), the main character sees her thoughts acted out in front of her. This provides some of the funnier moments and one scene that must have been really interesting to film, two characters talking at the same time, while only Dr. Bellows and us are supposed to be able to see or hear the second one. It was very well done.

The “Pilot” immediately draws you into the life and inner workings of the lead character, Dr. Bellows, as she tells of a recent dream, which we get to see played out on screen. Lili Taylor seems well suited for the role of an accomplished psychiatrist whose life gets turned upside down. Her reaction to walking in on her husband diddling their therapist and subsequent interactions with colleagues and patients are captivating. You feel for her and her troubles and want to see how she deals with her new path in life.

With the show’s setting being that of the offices of a group of therapists and now a lawyer, it should be great for introducing interesting and wacky characters and the playing out of funny and dramatic situations. If they can continue and bring on others like the troubled boy and his adoptive parents that are thinking of giving him back, the bickering couple, if stereotypical, but in this case well played, or the Monk

-like obsessive compulsive lady who finds it oddly comforting to find out that even her therapist has problems, then it could continue to be worth watching.

Some problems with the first episode, which can be hard to do with an ensemble cast, was really getting a feel for the other psychiatrists in the office. Like according to the episode description, there are two doctors having a secret affair. Well, it is so secret that I didn’t realize it until reading it afterwards. Looking back on it, I can see it now and the interaction between Dr. Cordelia Banks, played by Theresa Randle (Law & Order: Criminal Intent), and the married Dr. Taj Kalid, played by Mido Hamada (Path to 9/11, MI-5), makes more sense, but it was a bit too subtle. It does make for an interesting office situation to follow as Dr. Bellows goes to her friend and colleague Dr. Russell to talk about her husband’s affair.

Also, but at no fault of the show really, I just couldn’t see Chris Diamantopoulos, the gay best friend of Molly on USA’s The Starter Wife, as Dr. Bellows’ philandering husband. That being two completely different roles in shows airing so close together was messing with my head. I guess his The Starter Wife role was a bit more memorable than I would have originally thought.

I think State of Mind is a significant leap forward in quality for Lifetime, as it is better than Army Wives and much better than most of what I have seen from the cable outlet previously. It is definitely worth checking out. Although, for this reviewer it will have to get the TiVo treatment, as it will occupy the same timeslot as USA’s The 4400

State of Mind debuts on Sunday, July 15th and runs for eight weeks, ending on September 9th. Once it airs, come back and let us know if you agree or where we went wrong.

Previous: Tonight on the Tube: Traveler, Rescue Me and Last Comic Standing

Next: Tonight on the Tube: Earl and Office Repeats, American Chopper and Burn Notice