A couple of weeks ago I had the opportunity to talk with Spike Feresten of Talkshow With Spike Feresten and former producer/writer on Seinfeld. He will be back for a third season beginning tomorrow, Saturday, September 13th, in late night, following the 14th season premiere of MADtv on FOX. Kara DioGuardi, the new American Idol judge, will be the guest.

I was told I would have eight minutes to ask him questions and it ended up being about 10. I went in with nine questions and ended up asking him nine, but not necessarily in the exact order or form I had them in originally.

In the interview you can find out about his Dr. Phil obsession, the difference between writing for a sitcom and a talk show, his favorite guest over the past two seasons and more. And, at the end we talked about his favorite TV shows. Below you will find the entire transcript to the best of my listening and then typing ability, minus the opening few seconds where I thanked him for doing the interview and he asked me where I was talking to him from. So, on with the interview.

TVaholic: What was it that originally interested you in doing a talk show? 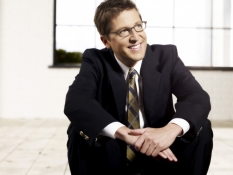 Spike Feresten: I wanted to get back to the ability of (pause), really wanted to just write about what was going on in the news, to be honest with you. I’d been working on sitcoms and had done a movie that took three years to come out. And, I just wanted to get back to that immediacy, commenting on what’s happening that week and then doing very strange comedy too.

TVaholic: Could you expand on your writing process for this type of comedy as opposed to writing for a sitcom?

Spike: Well, you know the sitcoms (pause), when I worked on Seinfeld you would, you would pitch an idea over the summer, write the script over the course of a couple months and they would shoot it and maybe October and then it would air in November. You know, there’s that time lag, where by the time it’s on the air, you know, it’s fresh to the people who are watching it, but for you, it’s old news, old history.

Writing this show, you can turn on the convention last night and can watch it and go you know what, I have an idea based on Clinton’s speech or here is a strange thing I saw on C-SPAN this morning. Let’s talk about that and then you can kinda get it out. You can kinda put it out on the air and then you feel better.

TVaholic: Did you think when you started that you would still be doing this three seasons later?

Spike: No, I didn’t think I would be doing this after I shot the “Pilot.” Every year it’s a very, very, very pleasant surprise to get that phone call that we’ve been picked up and they like us and they want us to do it again.

TVaholic: The immediacy that you talked about, of the comedy and being able to get it out there, would that be your favorite part of the show or is there something else that you really enjoy about the show?

Spike: Well, what I’m enjoying about the show right now is, we have a really funny staff of writers here. And, it’s a lot of fun, to come in to work and to get in a room with these guys and watch them bang around on ideas. That I find very enjoyable. And, it’s even more fun when you then get to take, take their jokes and read’em and show’em to everybody in front of an audience.

TVaholic: Speaking of writing, how difficult was it for you to do the show during the writers’ strike last season? 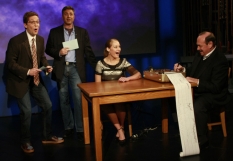 Spike: Well, we didn’t. We shutdown for, geez, two and a half months like everyone else did. Then we were, actually, the last show to come back. I think Bill Maher was the last one to announce and then we decided that it was okay for us to come back, but we respected the guild strike rules. So, it was very difficult. What we ended up doing was just booking lots of guests. And, doing lots of (pause), segments, like we had the folks from Moment of Truth on and anything that was segment produced. But, it’s, you know, it’s not much of a show without writers. So, it stings. It’s not a good thing to be thinking about, to be walking onto that stage without your staff of guys. It doesn’t quite work right.

TVaholic: Could you take my readers and I through a typical day, when you’re shooting the show?

Spike: On the day we shoot in front of the audience?

Spike: Well, you come in. Your morning is pretty much yours. And, you go into rehearsal about one o’clock. You kind of get swept up in this machine of a show. So, someone has you by the ear, dragging you from place to place, to make sure you don’t get lost. Because, your head is a little bit, your brains in a blender at that point. Then they park you behind a desk. They turn on the prompter and you read. And, somehow, it all works. It all comes together. But, what’s neat about talk shows is, if it’s not working, all you have to do is talk about what’s not working, to kinda make it all right and make it entertaining. And, sometimes it not working becomes funnier than the thing that you were hoping would work. But, not to you.

The whole process, the whole process, I mean, is wildly fun. If you think you might like it, you probably would. You get pick guests. You get to pick your staff. You get to write whatever you want or do someone else’s writing. It’s uh, who do you want to meet? Would you like to meet Hayden Panettiere this week? Why don’t we try and book her? Would you like to do a scene in which you kiss Hayden Panettiere? Yes, I would! Why don’t you write that scene? Maybe she takes her shirt off, maybe she doesn’t.

TVaholic: Have you had a favorite guest on the show, so far? 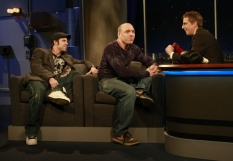 Spike: Lots of them. Really, every guest is my favorite guest, because that means we’ve got another show shot and in the vault. But, last year I really enjoyed the two hosts of the Discovery show Fight Quest. Because, you know that show, they go around fighting in different cultures, to prove that they’re better fighters than these other fighting cultures, around the world. Kind of a travel show, beat the crap out of foreigners show. But, what I loved about them is that they said it would be okay, if I could punch them in the face at the end of the segment. They actually fought over who was going to get punched in the face by me. And, then I hauled off and hit one of these guys right in the face as hard as I could with an oven mitt and I ended up hurting my hand. But, that’s, you know, you don’t get to do that stuff in your everyday life. Punch someone as hard as you can in the face and not get sued.

By the way, I think, to date, I’m the only talk show host that’s ever punched a guest in the face on television.

TVaholic: Do you watch a lot of TV yourself? 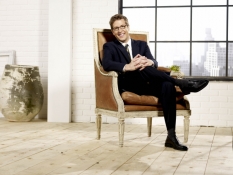 Spike: Yah, I’m a little obsessed with Dr. Phil. In fact, on the show, we’ll occasionally answer his viewer mail. We steal his letters off his website and answer the mail for him. That’s always a lot of fun.

I’m also (pause), watch everyone that’s got a talk show. Watch a lot of reality. Watch a lot of scripted. Pretty much watch anything. Name a show. What are you watching?

TVaholic: Right now, over the summer, I’ve been watching Burn Notice on USA and…

Spike: I haven’t seen that.

Spike: Are you watching Heroes?

Spike: Well, you know, Mad Men is the show that I really love. But, Heroes I’m a big fan of, I’m very excited about them coming back. It’s unfortunate the big break they had to take, but I really, really like that show. I’m looking forward to Fringe on FOX. That seems like it’s going to be a great show.

Next: Tonight on the Tube: Stargate Atlantis, Monk & Psych