Tonight on the Tube: Winter Olympics and Movies 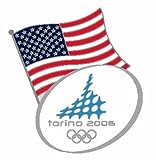 Coverage of actual events of the Winter Olympics in Torino, Italy is you best bet tonight. NBC starts in the afternoon with coverage then more in primetime and even more late night. Not much else on as it is a Saturday night.

48 Hours Mystery (CBS): Repeat where a respected professor is thought to be behind a murder.

Die Another Day (CBS): Two and a half hours of commercially interrupted Bond, James Bond, not to mention Halle Berry and that bikini clad walk out of the water.

The Green Mile (ABC): Tom Hanks as a prison guard in 1935 who thinks that a death row inmate may be innocent and may have the power to heal. Runs three hours.

Emeril Live (Food Network): Get some ideas for romantic dinners that canâ€™t miss in this repeat episode. Might be worth watching with Valentineâ€™s Day coming up next week.

Trading Spaces (TLC): Doug fixes up a bedroom while Laurie takes on a messy office.

Wild Weddings (TLC): Get a load of some wacky weddings with mistakes by ministers and funky themed weddings.

ESPN has the 2006 NFL Pro Bowl Skills Competition during the day. Later you will find Stanford at Gonzaga for some NCAA hoops action. You will also find coverage of the Winter Olympics on NBC during the day.

MADtv on FOX is a repeat with special guest Pamela Anderson. Saturday Night Live will not be on tonight but you will find more coverage of the Winter Olympics.

Next: Say it Again: Funny Lines From My Name Is Earl and Others