Jason the TVaholic Aug 6, 2006 Tonight on the Tube 0 comments 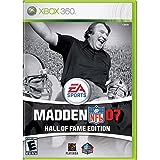 Tonight is the Hall of Fame Game. Get a look at what Sunday Night Football will look like on NBC this fall. The announcing team of Al Michaels and Hall of Fame Inductee John Madden are back to describe all the bone crushing action for you on the field. During the season Bob Costas will host a pre-game show, Football Night in America, with co-host Cris Collonsworth. Sterling Sharpe and Jerome Bettis along with SI reporter will be on hand for analysis and commentary. The first regular season game on NBC will be Thursday September 7th with the Miami Dolphins at the Super Bowl Champion Pittsburgh Steelers. The schedule looks pretty good and with the new flex scheduling at the end of the season it should be good all the way through.

The Simpsons (FOX): Repeat. Homer takes Bart on a road trip to Behavior Modification Camp after he steals Skinnerâ€™s keys.
American Dad (FOX): Repeat. Stan is the man in need of a plan for a party for the boss man.

Greyâ€™s Anatomy (ABC): Repeat. Izzie finds she has an attraction to a heart transplant patient.

Extreme Makeover: Home Edition (ABC): Repeat. A teacher who recently lost his wife and his three kids get a complete house overhaul.

Cold Case (CBS): Repeat. A wild puzzle, a boyâ€™s life in the balance and the team must solve it to save him.

Without a Trace (CBS): Repeat. A columnist whom never leaves her home has gone missing and the team must figure out what happened to her and are left with a bunch of strange clues that donâ€™t add up.

Three Moons Over Milford (ABC Family): Series Premiere. Elizabeth McGovern stars in this wacky small town dramedy where everybody thinks the world is about to end at anytime because the moon has exploded in three parts. This leads to the residents of Milford acting strangely for your viewing pleasure. The episode plays twice tonight.

The 4400 (USA): New. A conspiracy of shocking proportions is uncovered tonight by Tom and Diana. Runs 61 minutes and repeats again later.

Previous: Tonight on the Tube: The Recruit, The American President and Feasting on Asphalt with Alton Brown

Next: Tonight on the Tube: Kyle XY, The Closer, Saved and Psych