Jason the TVaholic Dec 2, 2006 Tonight on the Tube 0 comments 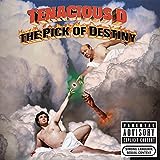 Saturday Night Football (ABC): The Big 12 Championship is on tonight with Nebraska vs. Oklahoma. The game starts at about 8:00 p.m. Eastern and runs for about three hours.

SEC on CBS (CBS): The SEC Championship is on tonight with Florida vs. Arkansas. The game starts at about 6:00 p.m Eastern and runs for about three hours.

Shark (CBS): Repeat. Stark and the team prosecute a group of football players for a rape but find it hard to find a witness who will talk.

Law & Order: Special Victims Unit (NBC): Repeat. Stabler and Beck try to get a prostitute to testify against her pimp.

All Star Holiday Gifts (Food Network): Repeat. Watch as stars of the Food Network share with you some of their favorite holiday memories.

Next: Tonight on the Tube: Sunday Night Football, Dexter and The Librarian