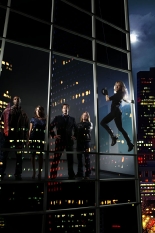 Long Synopsis: A former insurance investigator is hired by an executive at an airplane manufacturer to steal back the plans to their latest plane that has been stolen from them. He needs them before his upcoming shareholders meeting. He has already assembled a group of thieves, but wants someone to take the lead and keep them in line. The job goes pretty smoothly, but….

Review: Leverage is a whole lot of fun. I’ve seen this first episode twice now. First, I watched the DVD screener TNT sent and then last Thursday night at a theater screening with about 200 people.

Leverage, especially the premiere episode, comes off as very cinematic, which made it great viewing on a movie theater sized screen. Those in attendance seemed to really enjoy it and many stayed to ask questions of star Gina Bellman (BBC’s Coupling) and executive producer and director Dean Devlin (The Librarian, Independence Day), who were both in attendance. You can listen to my interview with both of them, as I had a chance to talk with them earlier in the day at their hotel.

The series stars Timothy Hutton (Kidnapped) as Nathan Ford, a former insurance investigator whose life has fallen apart after the death of his son that blames the company he worked for because they denied paying for treatment of his son, the aforementioned Bellman as Sophie Devereaux, a grifter that can assume just about any persona, Aldis Hodge (Friday Night Lights) as Alec Hardison, a wizard with the computer and just about anything digital, Christian Kane (Into the Wild) as Eliot Spencer, a retrieval specialist whose specialty is kicking ass, and Beth Riesgraf (The White Door) as Parker, a thief that likes the danger of repelling down buildings and climbing through small spaces. Check out some photos.

Leverage has a similar basic plot to a series like The A-Team, where they help those that are getting squeezed and have no other avenues to get help. But, the series is much cooler and high tech like say, Mission: Impossible. But, the closest show to it is the BBC series Hustle, because the basis of that series, as with this, is all about the long con and pulling one over on a deserving mark.

The story is told really well. There is some fun little flashbacks to learn about each character, which is a technique that continues throughout the season. The con jobs are pulled off in a fashion where you don’t get to see quite everything until the end.

Overall, it is well worth checking out and, in my opinion, is the best option on cable or network TV in the third hour of primetime on Tuesday nights. Law & Order: SVU and Nip/Tuck fans may not agree, but I would watch Leverage over either of those. As of now, this will be the only show in that time period that I will be watching once Eli Stone ends its run.

Leverage premieres tonight, Sunday, December 7th on TNT following the premiere of The Librarian: Curse of the Judas Chalice. Another new episode plays Tuesday, December 9th and then it will continue to play each Tuesday night through the season finale on February 24th, 2009.

Next: Tonight on the Tube: Desperate Housewives, Dexter, The Librarian & Leverage